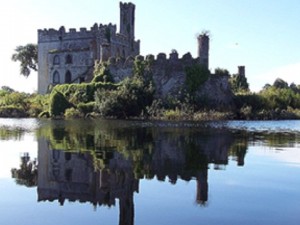 Castle Island has passed through the ownership of two famous families the Mc Greevy’s and the Mac Dermots.

The island is sometimes referred to as Mac Dermots Island to this day. We first hear of a castle Island when the Annals of Loch Cé report that it was burned down in 1187 by lightning.

The castle featured in the final act of the conquest of Connacht in 1235, by Richard de Burgo whose army included 500 mounted knights. The castle came under siege, first by a raft-mounted perrier (catapult), and then by fire ships comprising wood stripped from the nearby town of Ardcarne.

The combination of rocks and flames proved too much for the castle garrison, forcing Cormac MacDermot, King of Moylurg to surrender.

The castle is mentioned frequently in the ancient annals, being a focus for both fighting and partying. A poem addressed to Tomaltach-an-einigh MacDermot (King of Moylurg 1421-58) tells the story of the Hag of Loch Ce who used (or abused) Cormac MacDermot’s (1218-44) hospitality by staying on the Rock for a full year, and laid upon the MacDermot family the obligation of perpetual hospitality.

Brian of the Carrick, Chief 1585-92, is the last head of the clan who lived on the island.

A poem by Eochaidh O hEoghusa, written about 1600, laments the castle’s uninhabited and ruinous condition: 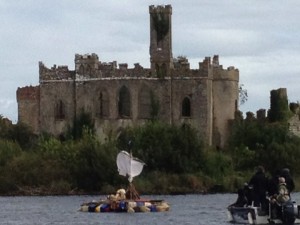 “…Thy bright fair form has changed, gone are thy gold-rich dwellings from thy fair comfortable long-walled enclosure, nor does the lime-white adorning of thy frontal remain…”

Lord Lorton built a folly castle in the early part of the 19th century, as one of the adornments to the estate whose centrepiece was Rockingham House.

Isaac Weld, writing in 1832, describes as part of “the castle proper” 2 rooms, one above the other, each 36 feetby 22 feet, with walls of 7.5 feet thickness. It is not clear whether this refers to part of the original castle, or the later construction. The folly castle, used as a summerhouse, was gutted by fire shortly before the Second World War.

Tour can be customised to suit the needs of any group visiting the park.The tour can last between 1 to 2 hours depending on pereference.

We cater for all Groups